Trump in 2024? For now, president’s hints are freezing GOP field. 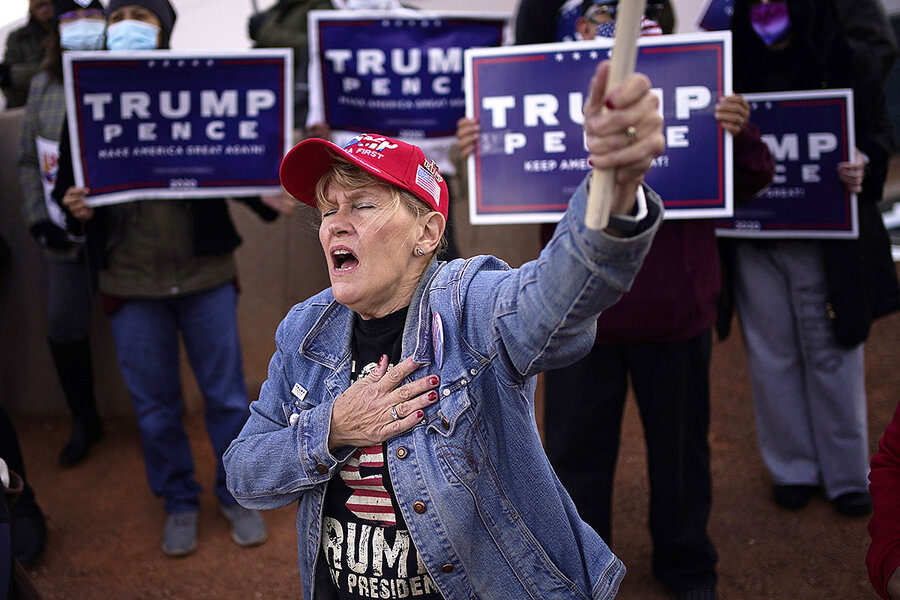 President Donald Trump has yet to concede the 2020 election, but a long list of potential Republican hopefuls for 2024 is already forming – including President Trump himself.

Not since Teddy Roosevelt in 1912 has a former president actively run for another term after leaving the White House. But Mr. Trump, never a slave to convention, may well run again. He suggested as much Tuesday at a White House Christmas party.

“It’s been an amazing four years,” the president told his guests, according to a livestream viewed by reporters. “We are trying to do another four years. Otherwise, I’ll see you in four years.”

Mr. Trump’s legal effort to overturn Joe Biden’s Nov. 3 election continues, despite winning only one victory so far among dozens of lawsuits. But after the court cases run their course, and assuming Mr. Biden wins in the Electoral College on Dec. 14, Trump allies predict he’ll announce for 2024.

“If he does not win this election, he’ll run again,” says Republican strategist Ford O’Connell.

In fact, the massive fundraising haul the Trump campaign announced Thursday – $207.5 million since Election Day, to be shared with the Republican National Committee – could be a harbinger of things to come.

Either way, comeback bid or not, Mr. Trump is likely to loom large over U.S. politics for the foreseeable future.

Still popular within the GOP, he can influence races up and down the ballot – including the two crucial Senate runoffs in Georgia next month – as well as legislation in Congress and, longer term, the battle for the soul of the Republican Party.

On Saturday evening, the president will appear in Valdosta, Georgia, alongside the state’s Republican senators, Kelly Loeffler and David Perdue, both of whom face runoff elections on Jan. 5. Both races are ranked as toss-ups, especially after Mr. Trump unexpectedly lost Georgia to Mr. Biden last month, and will determine control of the Senate.

The president’s remarks will be watched closely for any clues to his future plans.

But for now, Mr. Trump remains a force in Republican politics, especially as he teases another run at the presidency. And that has the effect of freezing the 2024 field. This is intentional, say people who know the president. Even just suggesting he’ll run again keeps the media spotlight on him, starving other potential candidates of the attention he craves. Reports indicate Mr. Trump might hold his own event on Inauguration Day, Jan. 20, and potentially even announce a 2024 campaign then.

“Right now, no Republican will stand up to challenge him,” says Steven Schier, professor emeritus of political science at Carleton College in Minnesota. “But will he look as formidable in a few years?”

More clues could emerge next month at the winter meeting of the Republican National Committee, to be held in Amelia Island, Florida. Party chair Ronna McDaniel has invited more than a dozen likely 2020 aspirants to speak, effectively the “first cattle call” of the 2024 cycle.

Mr. Trump is invited, but hasn’t said if he’s going. Vice President Mike Pence, who has long eyed the top job, is reportedly planning to attend.

Last year, Sen. Ted Cruz of Texas, the runner-up to Mr. Trump in 2016, told the Monitor, “I hope to run again.” He’s among those invited to Amelia Island.

Already, several of those listed – including Vice President Pence – have traveled to Georgia to campaign for the two GOP Senate candidates and build capital within the party.

In Washington – and Wilmington, Delaware, Mr. Biden’s hometown base of operations, for now – the post-Trump era is already taking shape. As the president-elect announces his cabinet and other top aides, the challenge of effecting a presidential transition during a pandemic and economic crisis moves closer to reality.

Soon the political world won’t hang on Mr. Trump’s every utterance and tweet. That suggests, some analysts say, a world that in fact moves on from the former reality TV actor and real estate developer, who improbably won the presidency four years ago as an outsider who sought to shake up Washington.

“He’s very good at controlling the news cycle,” says Julia Azari, a political scientist at Marquette University in Wisconsin. “But come January, there will be other stories, and it may be a point at which the news media largely move on.”

The spectacle of an ex-president “may not have the novelty of a Trump in 2015 or the news justification of a Trump as president,” she adds.

But for now, the president still commands center stage in the Republican Party – especially given the possibility he may run again, and the fundraising clout that brings.

Of the $207.5 million the Republican National Committee has raised since the election, some will go toward the president’s legal efforts but most won’t. Initially, half of the postelection fundraising went to retire Mr. Trump’s campaign debt, according to the nonpartisan Center for Responsive Politics.

Then, CRP reports, the fundraising shifted gears, and 60% of donations to Trump’s “Official Election Defense Fund” now go to his new “leadership political action committee.” The leadership PAC, known as Save America, is not an official campaign committee “but could begin to lay the groundwork for a potential 2024 bid.”

Leadership PAC funds may also be used to pay personal expenses, which the president has done, according to CRP.